The Western Peril, by Luís Garcia 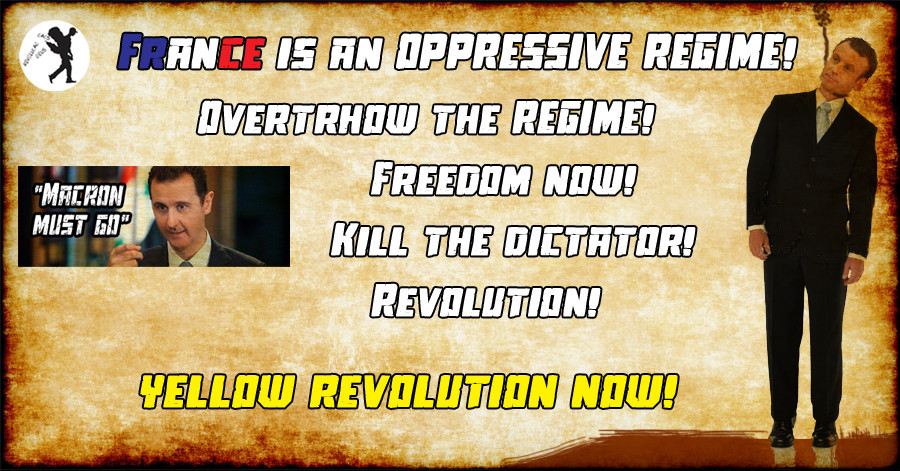 As I promised, here is the second part of the article showing evidence of Western falsehood about oppressive regimes. The first part can be read here.

I said it before and I repeat: up to today, I have not seen a single footage showing Venezuelan policemen oppressing its people (only the opposite, Venezuelan policemen being beaten, attacked and even murdered by terrorists "protesters" paid and armed by North American organizations to interfere in the internal affairs of other countries) since the beginning (2013-2019) of the supposed "oppression" and the criminal US/EU economic aggression on Venezuela, which is called an "economic crisis" by our prostituted media.

What there is not in Venezuela, there is an excess in France. But, while the West and their vassal states (like Bolsonaro's Brazil or Macri's Argentine) are wrongly slandering and attacking Venezuela, and accusing the great Venezuelan democracy of being a "dictatorship" were "oppression" reigns, on the other hand, no one in the West dare to criticize the criminal French Regime that has been openly and ostensibly oppressing and abusing its people for more than 2 months.

If you don't see it, it's because you just don't want to see it. And, precisely, most of the people in the West and in its vassal states, do not see it... because they do not want to see it!

Personally, I don't support Yellow Vests. There's all kind of political opinions among them and, in general, they only care about their personal rights as French citizens; not about the personal rights of Africans militarily occupied by France, or about the Syrians massacred by the French Terrorist Air Force, or about the genocidal French companies plundering and privatizing everything everywhere, including water resources, condemning millions of human beings to misery and death all over the planet.

I only support the social rights that some are claiming (if they demand the same for the poor citizens of the Western vassal states), as well as the right of the French people to express themselves freely, regardless of their political views (non-partisan drive me crazy, seriously, they are like jellyfish randomly carried away by the waves).

If you want more reasons why many others and I do not necessarily support the Yellow Vests, please read this article by André Vltchek: What Happens If the French Yellow Vests Win?.

Now, let's check some more evidence of illegal and criminal police repression committed by the undemocratic and terrorist French State:

France - Notice something in this video! Macron regime security forces always aim for the head, and the eyes specifically. #YellowVests #Giletsjaunes pic.twitter.com/wMPa6QdDHW

The creepy #EU is even taking down the elderly.

The Pensioners are also protesting the corrupt government and high cost of living. Is this older man really an extremist, someone who is dangerous?... to justify him being to the ground? #YellowVests... pic.twitter.com/PNek74FZdr

No, not DAMASCUS.
it happened in PARIS, capital of France Terror State. https://t.co/oeMeOMjT58

The #FrenchRegime is definitely on the brink of collapse:

Macron's riot cops crushes the head of a #GiletJaune immobilized on the ground and wounded. This type of behavior is that of fascists in a dictatorship! #France #Acte7#MacronDemission #Resistancepic.twitter.com/uELtmx1cib

This is how peaceful protesters are treated in #France in 2018 by #regime forces#Acte8 STRT .. #ChampsElysées:#GiletsJaunes #YellowVests need revenge ! #31December #GJ pic.twitter.com/lB1NrRDY3U

Shameless French Terror State.
I challenge silly Westerners to show me a SINGLE example of this in VENEZUELA. You will not. You will find Venezuelan Police being bombed and beaten up, not the opposite.
But Western zombies are to robotized to see it!
🤖🤢😴https://t.co/9J1IZPOKrA

#France: Victim of a flashball shot in the head, Olivier is currently in a coma 😱

ℹ During #ActeIX, this image was published by @RevPermanente of a #GiletsJaunes wounded in the head after a shot from a #flashball in the back in #Bordeaux #PoliceBrutality #GJ #MacronDemission pic.twitter.com/Dj6dOKaPAI

This is a must been report❗#Macron's yesterday's declaration of #war against #GiletsJaunes during #ActeIX in #Toulouse:

And some extra facts.

So now we have combat ready armored vehicles with the EU flag which are being used against unarmed European protesters who are demonstrating against a pro EU authoritarian regime.

Spanish authorities refused Boca Juniors & River Plate (Argentinian Teams) supporters entry to the Bernabeu Stadium, home of Real Madrid, unless they gave up all of their yellow scarves, t-shirts, etc. Spain is NOT a democracy. This is Europe in 2018. 🎗pic.twitter.com/MnleXcbDmX

Xiangyu - Your So-Called Freedom and Democracy

Axis of Evil - Axis of Resistance